"LIKE ANOTHER FINE SOUTHERN WRITER, EUDORA WELTY, MRS. WINDHAM USED PHOTOGRAPHY AS AN EXTENSION OF HER STORYTELLING, BRINGING TO THE EYE IMAGES THAT TRIGGER THE IMAGINATION."         –THE BIRMINGHAM NEWS

The six Kathryn Tucker Windham giclée prints shown below are only available on this website. They are printed on a 17 x 22 inch sheet of archival museum quality paper.
​
A gold certificate with Kathryn's signature is embossed at the bottom of each print, and a certificate is included from the Windham family as proof of authenticity. The title and edition number is hand written on the print as well. The "story" behind each image, told by Kathryn, is also provided on the printed letter sized certificate which is included with each print. Your satisfaction is 100% guaranteed. 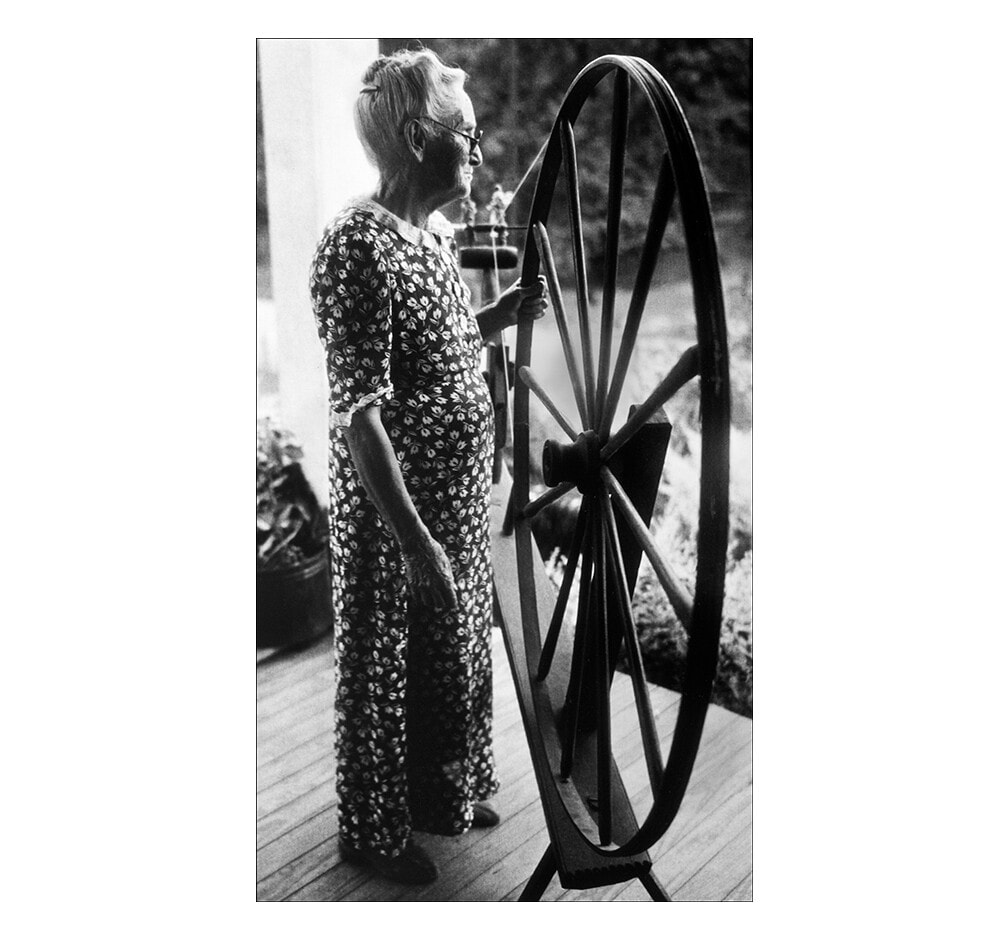 Note: The image of the Woman with Spinning Wheel was actually photographed using the camera mentioned in the story below!

To celebrate their 50th anniversary in 1930, the Kodak company distributed Brownie cameras free to children who were 12 years old.  My mother was among those lucky pre-teens. As soon as she received her Brownie, Mother began making photographs, and, though the camera models changed, she never stopped photographing until shortly before her death in 2011.

Mother was keenly aware of a changing South through the mid part of the 20th century.  It was often those images of disappearing sights that she viewed through the lenses of her cameras.  Backyard haircuts, old soldiers, children gathered for storytelling, mongrel dogs, country shanties, basket weavers, women at spinning wheels and the like captured her fancy, and she captured their likenesses on film.

Mother stored her hundreds of negatives in an old wooden file box.  She thought nothing of them other than that they were the biproduct of a hobby she enjoyed.  One day a well-known Alabama historian was visiting Mother at her home in Selma.  The woman was intrigued---even astounded---to see the collection of photography Mother had amassed through the years.

Soon Mother’s photography was the subject of exhibits in museums around the state. She gave talks about people and places in her photographs, recalling conversations struck up in the course of her picture-taking. As she told it, “Suddenly I have a whole new vocation.  Somebody told me that now I’m a photographer, so I guess I am!  -- Dilcy (Kathryn's daughter)


​Kathryn's recollections about the "Woman with Spinning Wheel."

I do not know the woman's name. I met her in the early 1930s and I'm not even sure now where she lived. My father and I had spent the day in Marengo County visiting some of the communities where he had lived during his childhood and youth. We had been to Shiloh, Magnolia, Vineland, Dixon's Mills, Octagon and Hell's Half Acre, and he had told me stories about each place. It was at one of the homes where we stopped that he introduced me to the woman in the photograph and told me about the spinning wheel.

"That spinning wheel belonged to my mother," he told me. "She and my father were moving and they had no place to put the spinning wheel so they asked a neighbor to keep it until they got settled. For some reason, my parents never came back to claim it. Wanted you to see it." 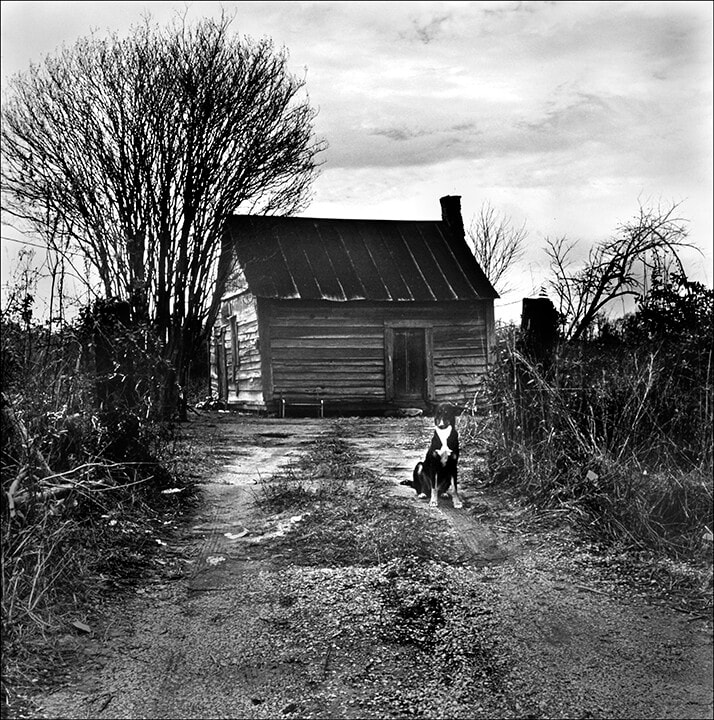 For a long time I thought it was unoccupied, but then I began to notice signs of life as I drove past: smoke rising from the chimney, fresh tire tracks in the littered yard, a child's plastic tricycle near the side door. Never did I see a human being on the place I watched the house for a year or more, watched its metal roof become rustier and its rough board exterior turn grayer.

He did not move when I turned to leave. He did give me a quizzical look as though he wondered if I had come to give him news of the whereabouts of his owners or had come to take him to a new home. 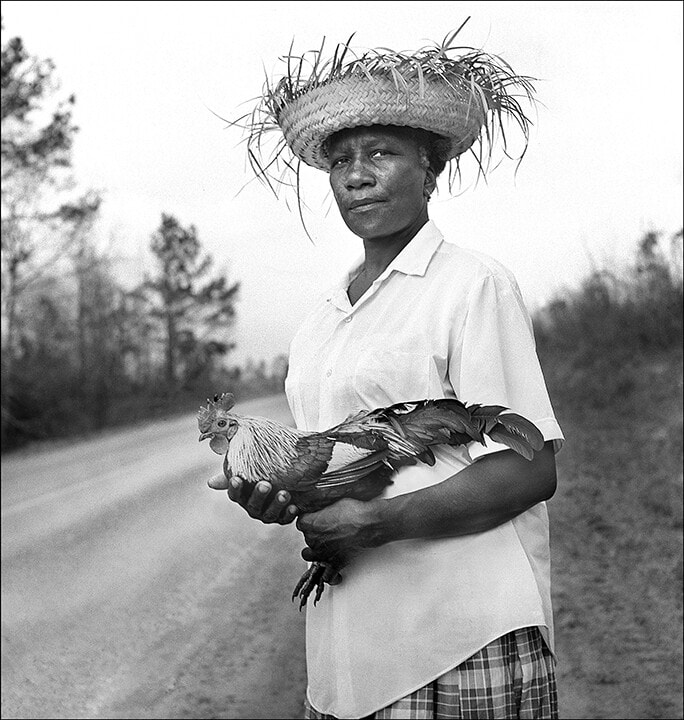 ​It was a hot summer day, when a hat, especially a straw hat, was a blessing.

She, whose name I do not know, wore such a hat as she walked along the country road. I nodded a greeting as I drove past. I had driven some distance before I recalled that she was carrying an unusual burden: she had a live rooster in her arms.

So I turned around and went back to ask if I could take her picture. If she thought the request strange, she did not say so. She posed with dignity and a fleeting touch of humor, holding the bird against her white shirt to dramatize his bright feathers. When I asked if I might give her a ride, she declined, saying, "I ain't got far to go."

I wish I knew what happened to the rooster. He appeared to be too young to be consigned to the stew pot. His colorful plumage (the golds and greens purely sparkled in the sunlight) and his long spurs bespoke game chicken ancestry, so he may have been on his way to a fight. Or perhaps a happier future awaited him as lord of a new chicken yard.

Whatever his fate, I wish I had a few of his feathers to decorate my own straw hat. 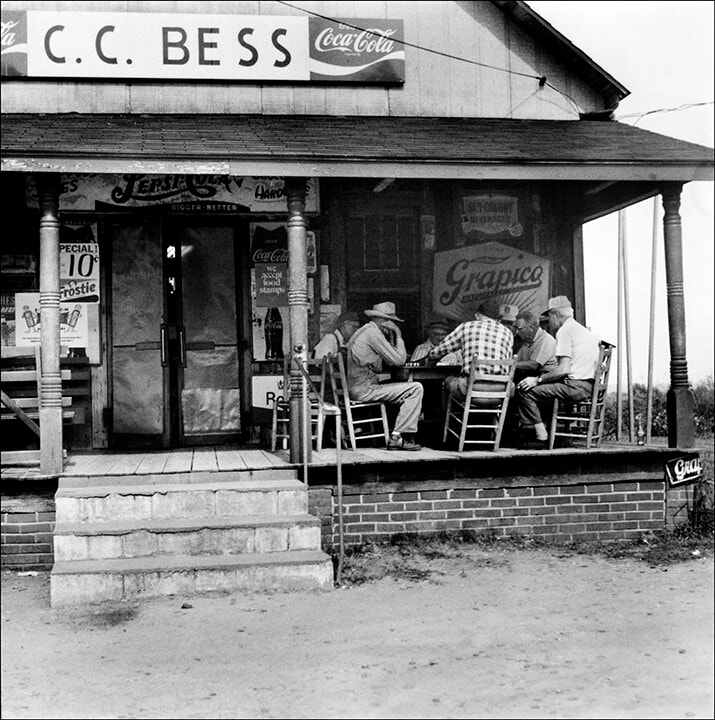 These men on the porch of C.C. Bess’s store would likely still be at their game of dominoes if the country store had not burned.  Until that fire, their game had gone on, almost uninterrupted, for years, winters near the stove inside the store and summers on the porch.

The fire came during the night, sending bursts of flames into the dark sky like signal flares, calling neighbors from sleep.  Those neighbors came, but it was too late.  So they stood away from the heat, occasionally exchanging snatches of memories, and watched as a local landmark, a rural gathering place, disappeared forever.

​Nobody is exactly sure when the domino game started nor does anyone recall who won the final match.  The scoring stick burned with the store. 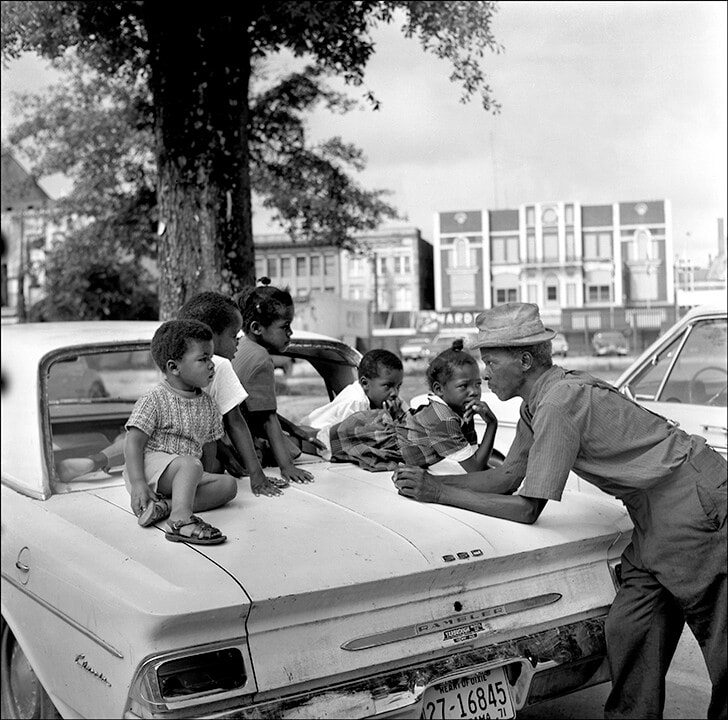 This storyteller in downtown Selma had five listeners on the trunk of his car. He appears to be keeping his young charges entertained while their mother (mothers?) shops.

I wish I knew what story he was telling them. 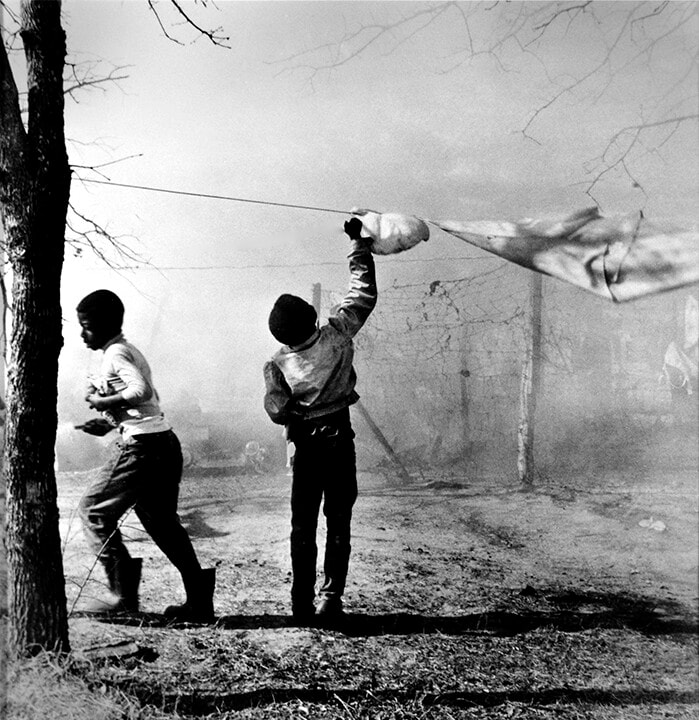 We did not usually cover small house fires when I was working for the Selma Times-Journal. So it was quite by accident that I happened to be passing by and saw the burning dwelling. The frame structure was already enveloped in flames when I arrived, and clusters of neighbors had gathered along the dirt street to watch it burn.

One of the women was embracing an older women, holding her close and trying to comfort her. A chill wind tossed the flames about and blew spirals of sparks in whirlwinds around the building.

​Out back, two boys braved the smoke and heat as they snatched the wash from their grandmother's clothes line. What they saved was all she had in this world.

Limited editions of these six images are still available

The six Kathryn Tucker Windham giclée photographs, available only on this website, are printed on a 17 x 22 inch sheet of archival museum quality paper. Each image is positioned on the print allowing for a balanced placement using the white space surrounding it.
​
A gold certificate with Kathryn's signature is embossed at the bottom of each print, and a certificate is included from the Windham family as proof of authenticity. The title and edition number is hand written on the print as well. The "story" behind each image, told my Kathryn, is also provided on the printed certificate which is included with each print. Your satisfaction is guaranteed.
Example of positioning of images on the final print, at the bottom center
​of each image the gold certificate is attached (not shown here)

Looking for smaller prints? Click Here
Back to Top of Page